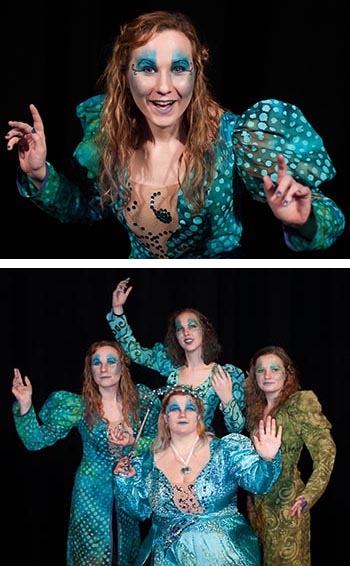 Magic, music and comedy are coming to Saint Mary-of-the-Woods College (SMWC). The Music and Theatre Department at The Woods presents William Shakespeare’s “The Tempest” on February 28, 2013 through March 3, 2013 at the Cecilian Auditorium.

Shakespeare’s late comedy, “The Tempest” has been performed as everything from a diatribe against British imperialism to a hymn dedicated to the pleasures of a life of solitude.  One of Shakespeare’s last plays, it centers on the powerful scholar and magician Prospero and his life with his daughter Miranda.  Prospero is the rightful Duke of Milan and has been seized by a wicked brother and exiled to a remote island inhabited by spirits, fairies, and the uncivilized son of the island’s former owner. SMWC’s production will be set in the 1900s – America’s Gilded Age – with Prospero as the usurped Mayor of Terre Haute.

Sharon Ammen, Ph.D. SMWC’s professor of theatre serves as director. She has directed numerous plays for the College including “The Sound of Music” by Rodgers and Hammerstein. Technical Director Tyler Hutcheson will add his creative expertise as the set designer.  SMWC welcomes back Indiana State University Professor Emeritus David DelColletti as lighting designer and professional actor Brandon Wentz as Prospero.  Original music will be composed for this production by John McIntyre, D.M.A., SMWC associate professor of music and award-winning composer, and Laurie Matheson, Illinois University press editor and published choral composer.

“Without losing any of the richness of Shakespeare’s language, we have added original choral and instrumental music,” explained Ammen. “ The aim of our adaptation is to explore Shakespeare’s meditation on the mysterious and ephemeral nature of life in a manner entertaining to everyone from dedicated followers of the bard to first-time initiates!  ‘The Tempest’ is suitable for audience members of all ages—and a great way to introduce Shakespeare to children.”

The performance honors the memory of Mary Gavin Crawford, who graduated from SMWC in 1946, and the Class of 1946.  Crawford performed at The Woods as a student and loved theatre throughout her life.  She and her husband, John, were generous supporters of The Woods, and upon Crawford’s death in April 2012, the College was gifted funds to establish the Mary Gavin Crawford Endowment. This endowment will continue a rich tradition of performing arts at The Woods.

Area college students with ID and children under 12 are free.