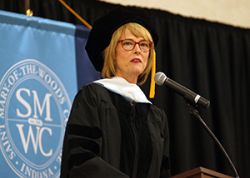 This marked the first commencement ceremony to take place in the Hamilton Arena in the new Jeanne Knoerle Sports and Recreation Center that was completed in fall 2014. Previously, the ceremony was held in the Cecilian Auditorium of the Conservatory of Music on campus.

Indiana’s 56th State Auditor and Chief Financial Officer, Suzanne Crouch delivered the commencement address and received an honorary degree of Doctor of Humane Letters Honoris Causa from SMWC. Crouch shared her experiences with the graduates – how she overcame adversity, triumphed after loss and kept moving forward despite not always knowing exactly where she was going. 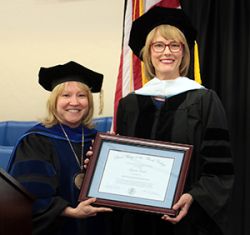 “It is okay if you stumble and fall, as long as you pick yourself up,” she said during her address. “It might take you some time to find your passion and path in life, but that is okay as long as you are always moving forward and never looking back. I am excited by the countless opportunities you all have to make a difference in our world. I am so honored to be here to share in your accomplishments thus far, and I look forward to witnessing the greatness you will bring to the world.”

When asked about the opportunity to speak to the graduates Crouch shared, “ I am so humble and honored  to be considered for such a high honor with such a prestigious school.  I look at this as an opportunity to share my life experiences with these young graduates. And to encourage them that it is ok to take your time to find your niche and your path in life. The important thing is to never give up.”

The excitement for this next step permeated through the crowd as they exited Hamilton Arena, now graduates of The Woods.

Kim Woods with her family

“I can’t say enough about the faculty and staff and how caring and supportive they have been, said Kim Woods, education major from Paris, Ill. “I’m thrilled about this day! I’ve worked full-time and raised two children. I wanted to get my degree, as I thought it was important for them to see me do it. I keep telling them you just keep swimming, swimming and you’ll get there.”

Awards were presented during commencement for service, leadership and academic achievement. The Maud Helm Rockwell Medals for Academic Excellence were presented to the graduate of the campus program and the graduate of the Woods Online program with the highest academic grade point average. Corianna Frederick received the campus award, and Kristi S. Rice received the Woods Online award. 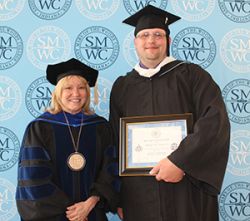 The St. Catherine of Alexandria Medal, sponsored by Kappa Gamma Pi, the National Catholic College Graduate Honor Society, was awarded to campus student, Lindsay Whitehead, equine studies major, of Friendswood, Texas, and Woods Online student, William Welch, of Terre Haute, Ind., majoring in paralegal studies. They received the award for demonstrating both academic excellence and exemplary service and leadership on and off campus.

“It was a long journey and anyone pursuing a degree should never give up,” said Welch.

The Alumnae Leadership and Service Award recognizes outstanding students who have demonstrated exceptional service and responsible leadership during their time at The Woods. The undergraduate recipient was campus student, Cecilia Gray, women and theatre major, of Terre Haute, Ind.

Sister Barbara Doherty – author, leader, lecturer, scholar, servant, teacher, theologian. She was the 13th president of Saint Mary-of-the-Woods College from 1984 to 1998. Other positions have been as director of the Institute of Religious Formation at Catholic Theological Union in Chicago, president of the Indiana Conference of Higher Education, served in Congregation Provincial leadership and national boards of the Leadership Conference of Women Religious and the Women’s College Coalition.

Mary Melanie Waller took a year off after retirement from the Navy as a Captain, before returning to private practice in Dallas, Texas.  In 2008, she returned home to practice urology in Illinois. She is also a Fellow of the American College of Surgeons. She served on the Saint Mary-of-the-Woods College Board of Trustees from 2002-2011. Waller was elected president of the Illinois Urologic Society in 2014 and serves on the board of directors.  She participated on the crisis in Illinois Rural Healthcare Workforce identifying and addressing the healthcare needs in the medically underserved rural and urban regions in the state. Currently, she is the vice chief of the medical staff at Richland Memorial Hospital in Olney, Ill.  She is the only urologist in a nine county area.