The Wabash Valley received a taste of Chinese culture that lasted an entire week, culminating with a moving musical celebration by Beauty & Melody, an all-female ensemble from the Sichuan Province on Saturday, October 2, 2010. The ensemble came to Terre Haute through collaboration between Arts Midwest World Fest, Arts Illiana and Saint Mary-of-the-Woods College (SMWC).

The stage, outfitted with exotic instruments, effortlessly transformed the woods of Indiana to ancient China as the first note softly filled the Cecilian Auditorium at SMWC. While the performers easily lived up to the first half of their name, beauty, it was not only the beauty in their appearance that stuck the audience, but also the elegant beauty in the movements of the musicians as they played these centuries-old instruments.

“It was exciting, having them here,” Yuying Nie said. Nie, called Sabrina by her classmates, is an international student from China studying music at SMWC. “It was so familiar, just like back home.”

Beauty & Melody performed 15 arrangements at the concert, including a surprise encore with the SMWC chorale.

“To describe this experience in one word would have to be exhilarating,” said Sherry Bube, freshman SMWC music therapy major and member of the College’s female chorale ensemble. The chorale joined Beauty & Melody to sing a traditional Chinese arrangement in a language that, prior to a few weeks of rehearsals, most of the young women had never before uttered.

“That’s the beautiful thing about music,” said Michael Boswell, assistant professor of music and director of SMWC’s chorale. “You find the need to make music is universal. You discover that, basically, we all sing about the same things.”

This is a true example of a cultural exchange, said Beauty & Melody’s music director Xiao Chao as he welcomed the chorale on to the stage. The physical and vocal presence of the Woods women, dressed in floor-length black gowns, added a unique element to the performance as they joined with the brightly adorned and extremely proficient Chinese musicians.
“It was the merging of two worlds and two ways of making music into one sound,” Bube said. 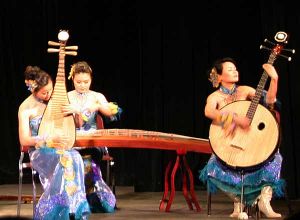 Beauty and Melody performs at SMWC.

Beauty & Melody performed a wide range of Chinese musical styles, but despite the hundreds of years between them, each song shared subtle commonalities. In “The Song of Final Farewell,” the sounds from the Erhu, often called a Chinese violin, were stilling and heartbreaking in its solidarity. The rise and fall of the instruments together were so poignant that many members of the audience closed their eyes to embrace the sounds. In “Birds Worshipping the Phoenix”, the sharp chirps from the Suona, an instrument similar in shape to an oboe, perfectly mimicked the jovial nature of birds. The merriment of that piece was so contagious that the audience, forgetting the polite stillness of a formal concert, filled the auditorium with youthful laughter.

“The sponsorship of our four local colleges has provided the extra benefit that the community concerts are free and open to the public,” said Sherri Wright, regional services coordinator for Arts Illiana. “Beauty and Melody played to a near capacity crowd in Cecilian Auditorium—what better indication that our community appreciates and values the importance of this cultural experience.”

During intermission, the house was buzzing with amazement and an appreciation for a style of music many of them had never before seen live. Beauty & Melody attracted about 700 people to the Cecilian Auditorium. However, this cultural exchange was not limited to just one night. Beauty & Melody had been making an impact on the Wabash Valley for nearly an entire week.

“Arts Midwest WorldFest has given our community an exceptional opportunity to experience world-class musical ensembles for week-long residencies in our schools and other community venues,” Wright said.

“Having Beauty & Melody exposed the community not only to the music and sounds of China, but gave us a glimpse into a culture that is much older than our own,” Boswell said. “And through learning about the cultures of others, we slowly build a more understanding, tolerant and peaceful world.”